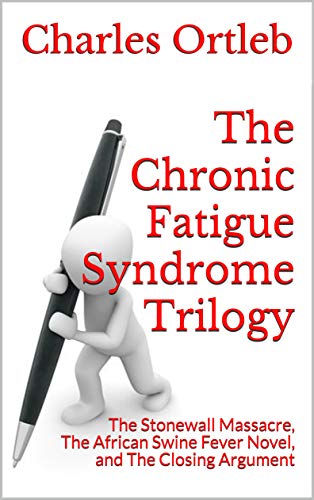 Three unique works of political and satirical fiction that capture the universe of lies, disinformation, and prejudice that constitute the epidemic of Chronic Fatigue Syndrome.

The African Swine Fever Novel has been called "The Animal Farm of our time." This satirical fable uses talking pigs to raise serious questions about the role of propaganda and disinformation to control what people think and do about epidemics. Anybody who knows the cockamamie history of the CDC and Chronic Fatigue Syndrome epidemic will appreciate the book's sarcasm and numerous irreverent passages. The humor in the book is dark and the vision of current and future public health situation is apocalyptic.

The Closing Argument is about an African-American man who is accused of spreading AIDS. His lawyer captures the attention of the world when he puts the government on trial for lying about the relationship of Chronic Fatigue Syndrome and AIDS. In a very detailed and science-based closing argument, the lawyer attempts to open the eyes of the jurors to the fact that the truth about AIDS and Chronic Fatigue Syndrome lies behind a mask of scientific fraud and deception. The unpleasant truth about AIDS and CFS is that racist and antigay thinking are the coin of the epidemiological realm. The unresolved conclusion forces the reader to act as a juror by deciding the verdict. Is the government covering up the relationship between AIDS and Chronic Fatigue Syndrome or isn't it?

The Chronic Fatigue Syndrome is available on Amazon in print, Kindle and Kindle Unlimited.